Nomination that then received the award

The Origin Live Sovereign deck won "Best Vinyl product of the Year" in Italy so we are pleased to publish a translation of the full review here by kind permission of "Fedeltà del Suono" magazine. 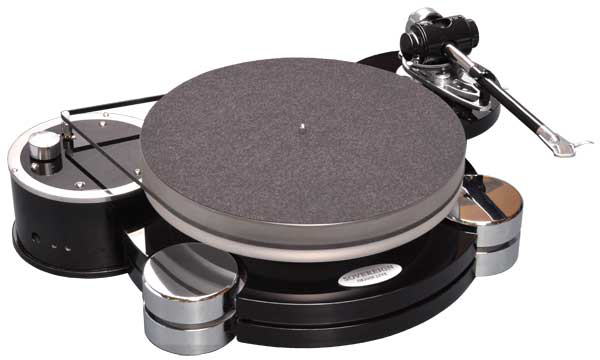 Full Review of the Sovereign Deck

The British company Origin Live started business over two decades ago, producing accessories for the analogue market. Next they introduced modification kits for Rega arms, bringing these excellent and economical devices to a level directly comparable to much more expensive tonearms.

The success of the Origin Live kits led to the development of their own line of tonearms. Originally based on the Rega design (see Silver Tonearm), but then gradually diverging from this design, to the latest achievements, Encounter, Conqueror, and Illustrious (part of this test), with the unique "dual pivot" bearing technology. Only the arm base geometry maintains its similarity with the Rega design.

Along with this line of tonearms, an interesting range of turntables has also developed, some of which are currently placed at the top of world class products. This is the case with the Sovereign which has been sent for this review.

The Sovereign sits at the top of the Origin Live turntable range and incorporates many of their latest ideas about how a high performance turntable should operate and perform. The following outline presents extracts from an interesting discussion with the designer and owner of this British company, Mark Baker, describing the huge wealth of innovations accumulated over the years by this small but very dynamic Southampton based company. 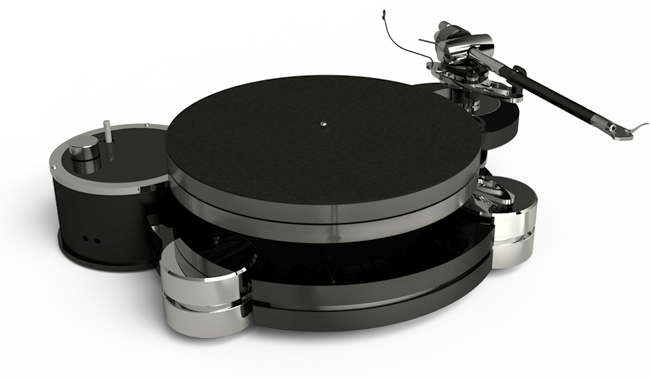 The design employs a semi-suspended sub-chassis and is constructed with high quality materials. Assembly is very precise to satisfy exacting tolerances. This is truly an object of remarkable beauty, with attractive chromed parts. The plinth is high mass, and low resonance is achieved by a sandwich construction of inert materials. The said plinth or base, is designed so that decoupling from the underlying support surface (or if we want to see things in broader, but more realistic terms, from the environment) occurs through three pods. The platter made from high inertia and low resonance acrylic, rests on a sub-platter of a similar material. The bearing is machined to high precision / low tolerance, and then honed by hand. Lubrication is provided by a special "high grade" oil. The rigid low-resonance sub-chassis rests on a single central point of support, together with a series of vibration dissipating devices. The high mass motor housing completes the picture of this massive, heavy and stylish turntable, distinguished significantly from the now more or less similar contemporary belt drive turntables, whether rigid or suspended.

The power supply is made with the highest quality components, and features a separate over-sized transformer. This is to ensure high power delivery and correct speed regulation of the motor. The regulator functions accurately over temperatures ranging from a polar winter to Tanzanian summer.

The best thing about this turntable, beside the aesthetics, is the semi-suspended design (or non-suspended) which employs a unique suspension consisting of a single semi-rigid central point. This actually feels rigid, and means that there is no need for any adjustment, either before, during, or after set up - other than adjusting the deck for level as befits all turntables. Mount the arm, connect the power supply and away you go. There is no worrying about going out of tune over time. The turntable will not need any additional maintenance. The arm board supplied as "standard" with the Sovereign, allows an easy adjustment of VTA (vertical tracking angle) for Rega and Origin Live arms, which further simplifies the user's life.

Big and heavy as befits a turntable of this rank, the Sovereign requires a solid support, but you don't need to go mad. Resting on my old solid Finnish spruce cabinet, it provided exactly the same performance as when placed on the highly respected and very expensive support made by “Finite Elements“ for turntables.

The arm that was provided for this review is the recent Illustrious MK3, which employs the same high-rigidity metal arm tube as the previous MK2 but adds the unique "dual pivot" mechanism for the bearing (conceptually similar to uni-pivot arms). This concept has the following advantages: ability to track well, insensitivity to environmental vibration, low friction and freedom of movement in the bearing. However dual pivot removes the undeniable flaws present in Uni-pivot designs, first of all the substantial instability, and also, according to many - I don't want to generalize, a not very substantial bass performance.

The design encompasses different inertia's in tracking: high inertia in the horizontal plane for maximum stability when reading the groove, but minimal inertia in the vertical plane for maximum tracking capability, which explains what was said before about the dual pivot's ability to track well. The bearings are the same, high quality as fitted to the top Enterprise arm. The headshell is made from high strength alloy for maximum rigidity, to avoid the microscopic flexing of traditional shells that influence the final musical result by producing constant micro-vibrations. Side note: the system was delivered to me after having been shown at a trade show, and by an oversight that I can fully understand, was devoid of the counterweight and anti-skating weight. Owning a Silver Arm, I easily remedied the problem.

Installed in my current reference system, which consists entirely of valves on two racks - a Dyssanayake Kamasasthra pre-phono, a Harman Kardon Citation XXP preamp, a Harman Kardon Citation XX power amp, and a pair of Kef Reference 105.2, with a Dynavector DV XX2 Mk2 mounted on the Illustrious arm. Having made the usual adjustments to the arm, the listening session began.

A belt drive deck that sounds very similar to a good direct drive deck is a great compliment. For me, speaking of good Direct Drive, means my Denon DP 6000 and 7000, Luxman PD 444 and even the Thorens TD 124 which is a special design with an idler wheel, and can be counted as a direct drive. In every sense, the Sovereign has attributes typical of the best belt drives: image depth and bass extension, wonderfully sweet sound, combined with a speed in attack and decay. This along with a pitch precision and dynamics so surprising that you are led to think that it is indeed, a great direct drive.

The stability and sound stage width, leave no doubt that the arm is extremely good. I cannot make a direct comparison, not having an armboard to accommodate other arms, except my Silver Tonearm, also by OL. However the performance difference between these two arms is very obvious. The Illustrious arm adds it's contribution. Both arms are remarkable and worth taking note of.

The purity of the sound is such, that I'm forced to believe that the damping and isolation measures implemented by Origin Live are dramatically effective. The bass is powerful, tight but but never overly damped. As I've already said, it is also decidedly extended in depth, which combined with the unique dynamics, produces the impression of remarkable body and absolute power. Clear dynamics in the mid-range and high frequencies, further contribute to the impression of an extremely vivid and lifelike sound produced by the turntable, or rather this turntable/arm combination.

I do not have any data on the effective mass of the Illustrious arm, but with the Dynavector XX it gets along wonderfully, allowing it to track even the most complex grooves. I'm not a fan of the Saint Saens Orgel, but in this kind of test it is very useful. The arm tracked with absolute precision and total absence of distortion even at 1.5 g tracking force, which is certainly not ideal for this wonderful MC, which in "non tracking test" conditions is set to 2g.

In essence, this is a turntable/arm combination which flies close to the ultimate in terms performance level. I cannot (perhaps due to the limited time available for the test), detect any serious, medium or even small flaws. I'd like to discover more, given additional time, not so much to run a witch hunt, as to realise the true extent of it's ability to provide musical pleasure.Meanwhile, the Sovereign sits at the pinnacle of current turntable production unless you pay crazy money. As for the arm, all I can say is "superb and well done".