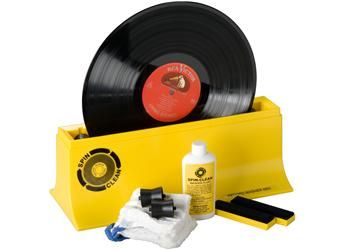 Anyone who has used the conventional brush-type record cleaner knows how awkward they are to use and that they have only a limited ability. The Spin-Clean® record washing system approaches the issue in a completely new and inventive way, enabling users to clean both sides of their records at once, without using the turntable as a cleaning platform. With the Spin-Clean® record washing system, you'll help preserve your precious turntable, stylus, and of course your record collection.

Henleys Secret Advantage Spin-Clean Record Washer MKII's secret weapon is its special washer fluid. This unique formula encapsulates the dirt that comes off the record and sinks it to the bottom of the washer basin so it is not re-deposited back on to your records during the cleaning process. But why is Spin-Clean Bright Yellow? Henleys chose bright yellow for the color of the Spin-Clean so you can see the dirt collecting at the bottom of the unit!

Specifications and Package Contents Spin Clean Record Washer MkII looks and feels right. It's inconspicuous in size (six inches wide, fifteen inches long, and six inches high) and it has no power requirements, making it the "Greenest" Record Cleaner in the industry. But best of all, there's absolutely no installation required, making it a very flexible and attractive Package. Each Spin-Clean MKII comes with a 4 oz. bottle of the MKII washer fluid (which is enough fluid to clean up to 700 records!), two washable and re-useable MKII drying cloths, one pair of MKII Brushes, one pair of MKII Rollers and the MKII owners manual.

Made in Pittsburgh Proudly Manufactured and Hand Assembled in Pittsburgh, PA Since 1975. The Spin-Clean Record Washer MKII has been Manufactured and Hand Assembled in Pittsburgh, Pennsylvania since 1975. As one of the world's most influential turntable manufacturers, and one of the sole creators of the UK's vinyl re-birth in the late 1990s/2000s, Pro-Ject Audio Systems are delighted to be the sole world-wide distributors (excluding the US and Canada) for Spin Clean; as a result of this Henley Designs are delighted to be the sole UK importer/distributor.

The Real Test
There's only one way to really find out what Spin-Clean® record washing system is all about; buy one today and see for yourself how great and affective this system really is! The Spin-Clean Record Washer MKII comes with a Limited Lifetime Warranty on all parts, excluding brushes for wear and tear. However, through over thirty years of experience we know this product has a great reputation for reliability. We know that once you try the Spin-Clean® record washing system, record care will never be the same again. So go ahead and do it. Buy Now!

Note: The fluid used in the Record Washer System does not contain alcohol, so it is fine to be used with 78RPM records.

Reviewed by:Alan Sircom
Comments of Note: "The Spin Clean is an effective remover of bacon-frying noises. The pops and crackles that plague 'VG' ['Very Good'] eBay albums are generally reduced..." "A sure sign of its effectiveness is the sheer amount of dark grey gak that lines the bottom of the yellow bath after working on just a few 'clean-ish' albums; if all that smoky residue was on the disc, no wonder it sounded like the musicians were standing round a bonfire."

Reviewed by:Neville Roberts Score:5 Stars - 'Recommended'
Comments of Note: "Does a fantastic job and it's amazing to see the dirt collected, even with apparently clean records."

Feature:'Mini-Test | Cleaning Accessories' Score:5 Stars, Grouptest Winner
Comments of Note: "...it's basically a plastic bath in which you quite literally wash LPs." "The clever feature, which we really liked, is that disc immersion depth is set by a pair of rollers, which can be put in position to cater to 12-inch, 10-inch or 7-inch discs - this saves the bother of fitting a centre spindle and clamp." "...running costs are minimal." "It's simple and quick to use and results are excellent, among the best we've encountered from any LP cleaner." Verdict - "Smaller, lighter and cheaper than a vacuum cleaning machine and hardly more bother, the supplied fluid does a great job with all vinyl and shellac discs."

Reviewed by:Jeff Dorgay
Comments of Note: "A Record Cleaner for the Regular Guy" "It’s not as technically complex as a VPI, ClearAudio or Loricraft machine, but it’s damn good and it actually does a better job at ground in fingerprints than my Loricraft does." "The Spin Clean II is the ultimate in simplicity; there is no electric motor to burn out and no vacuum hoses to loosen. Just mix up some cleaning solution, dump it in the tank and you are ready to begin." "The best feature of the Spin Clean is that it cleans both sides of your record at the same time." "If you’ve never used a record cleaning machine, you’ll be amazed at how much quieter your records sound after a pass through the Spin Clean." "Like any other aspect of audiophilia, you can get as obsessed as you’d like to with record cleaning, but if you never do more than use a Spin Clean, you’re way ahead of the game." "If you have a turntable and you don’t have a Spin Clean, you need one. If you’re a maniacal LP collector with a top of the line RCM and you don’t have a Spin Clean, you need one too. This is an accessory that no vinyl lover should be without."