Although I am a supporter of the theory that the most important part of a Hi Fi system is the front end, as you can't replace information in the signal that wasn't extracted from the source material no matter how good the rest of the components, until recently I hadn't appreciated the influence of the tonearm.
Of course a high quality motor unit and power supply to spin the vinyl at a constant rate of rotation is required and, yes, a cartridge with a delicate and precise alignment of coils and finely sculpted stylus is needed, but surely all the tonearm does is hold the stylus in the groove and allow you to adjust its tracking?
True: But that is not such a trivial objective to execute. The movement of the stylus is minute and vibrations in the arm will generate noise by moving the magnetic field relative to the coils in the cartridge, masking fine detail and degrading the sound.

I had been intrigued by reports of a super arm at a real world price from Origin Live - it's Silver 250. And as a company with quite a reputation for modifying the Rega tonearms to improve upon an already legendary design, I felt I ought to investigate. Having been impressed by their DC-motor upgrade for my LP12 I was expecting good things but I was totally taken aback by the sonic performance of the Silver 250............read on.

How does it Look and Feel?

For a full description of the features of the arm visit this web page. One of the key design features of this product is the armtube that sits within widely spaced horizontal bearings, atop the black Rega base and vertical bearing. The armtube is made from a specially heat-treated alloy - Origin Live are naturally secretive about exactly how it is treated. The design aim being to dampen vibration set up in the arm and prevent reflection of acoustic waves back into the cartridge.
The styling could be said to be minimalist. Thus once installed it may not be as eye-catching as those arms with dials and various counter-balances to adjustment tracking and bias. Nevertheless, bias and tracking force are easily set with the aid of a balance (but then you really should use a balance to set tracking force rather than relying on the dial settings on arms). Adjusting the arm height to set VTA requires an optional collar 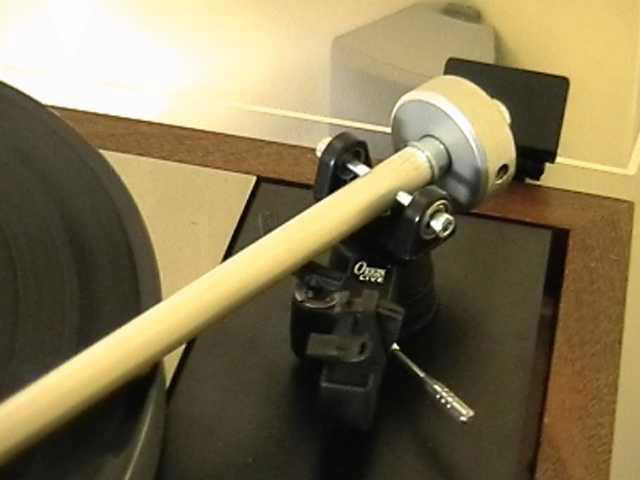 The arm lift mechanism is the same as can be found on Rega arms. It has a good positive feel and gently lowers the stylus into the groove. The arm clip was a little stiff at first but after a few weeks of use has freed up and is now fine.

The arm comes with excellent fitting instructions. On my LP12 the bottom of the armthread protruding through the hole in the armboard snagged on the corner brace if the arm was lowered too far. This apparently is not uncommon on later LP12s and the common solution is to carefully remove a small section of the corner brace. Not a difficult job I would imagine although not one I undertook as it was just possible to set the VTA in its optimal position by raising the height of the record using the Ringmat spacer system.

The only tricky part of the installation was dressing the arm cable, as it is rather thick and it is important not to let it snag on the bottom of the LP12 base. Once this had been achieved the most time consuming operation was to arrive at the optimal tightness for the securing nut. This is accessible through the hole in the LP12 base beneath the arm but is nevertheless a little fiddly. The VTA adjustment is by means of a threaded sleeve that fastens to the arm thread and sits on the armboard thus raising and lowering the arm.

I also installed the arm on my new Michell Orbe SE. This was much more straight-forward and because of the open design of the arm board, it was easy to adjust VTA and the tightness of the securing nut.

Overall once set up the Silver 250 looks and feels like a quality item, especially when coupled with modern open-style turntables such as the Orbe - but that's a matter of personal taste!

I tried a number of cartridges with the arm including my usual MC AT33 as well as some MM whilst testing a phono stage, and at first I thought set up might be a bit tedious due to the VTA adjustment method. But no it was fine and if there is no requirement to frequently change the cartridge (which is likely to be so for the vast majority of potential customers) then a couple of hours installing and setting up the arm really isn't an issue. I can now change cartridges in a matter of minutes and in all other respects this arm is a reviewers dream..........let me explain.

So How Does it Sound?

To begin with I found this arm both a revelation and a frustration. The instant I lowered the arm onto Led Zeppelin's Whole Lotta Love - set spinning on the LP12 - I realised that this arm was special. This track is not one of my normal "killers". I simply fancied listening to it while I played around with the tracking force and VTA - to get a feel for the arm.

But the shimmer on the cymbals, the power of the drums, the tightness of the bass, the ambiance of the recording, the vibrancy of the guitars and sheer emotion of Robert Plant's performance came flooding out of the 'speakers. Before proceeding any further with the set up I sat down and listened to the whole of Led Zep's second album
This arm invites you just to listen and not to fiddle in search of a better sound. But after a little bit of adjustment the top end performance was improved somewhat but I had just about hit the sweet spot straight out of the box! There then followed an evening of pulling out record after record just to hear what they sounded like with this arm in place.

Everything I play was so improved. The low frequencies on Leftfield's el cid just went deeper and deeper, and as a whole I could play the track at ear-splitting volume before harshness set in, which I can only attribute to there being a very pure signal indeed being conveyed to the amplifiers. One record that was a real surprise with the Silver 250 in place was Out of Control by the Chemical Brothers. The urgency and flow of the songs construction was laid bare and so cleanly rendered that yet again the volume control was wound further and further clockwise to create that nightclub feel.

Generally, the sound stage was highly tangible with 3-D imaging giving the illusion of being able to carve out the performers. Vocals especially were positioned above and in front of the 'speakers. The remarkable performance of Eva Cassidy's "Fields of Gold" was portrayed beautifully both in terms of texture and range. The arm conveying delicacy just as brilliantly as it did raw power.

Having enjoyed listening to the arm the frustration came when writing this article. I could not pin down why I liked the arm so much - what was it doing to make such an impact? I suspected that it had no sonic Conqueror, that is to say it was as near as makes no difference simply conveying the signal from the record to the amplifiers. But how does one assess such an idealistic quality? Even comparing it with others arms, perhaps much more expensive that the Silver 250, would only show up differences and maybe flaws in their performance. I concluded, therefore, that since I was expecting the Orbe, some speakers and a phono stage to review, one approach would be to listen to the performance of these component and try to spot any invariance in the sound that might be ascribed to the arm. OK this is not precise science but who could claim that Hi-Fi ever is?

I first tried some different speaker cables. Yes I could hear the differences that I had previously detected much clearer with the Silver 250 in the system, so making the forthcoming review on those cables easier. But no major changes in the balance or sonic dynamics. I then took charge of a review set of speakers. These were a big disappointment when I first plugged them in - but I had been warned that they would take 100 hours to burn-in so I put those back in the box and returned to my IPLs.
Next up was the Orbe, replacing the LP12. Having heard the Orbe before equipped with an upgraded SME IV I was delighted to hear the improved imaging, much tighter bass coupled with a sweet and open top end. AND the Orbe/OL250 combo really rocked - much to my great relief as I was worried, having sold the LP12/Ittok, that this attribute of the older vinyl spinner may have had to have had to be compromised in my search for a more accurate sonic presentation. But all I could conclude from exchanging the LP12 with the Orbe was that the Silver 250 was equally at home with both turntables.

Next in-line for audition was a MM phono stage. I used Goldring Elektra and Audio Technica AT95E cartridges and was surprised just how good these cartridges sounded through a MM stage costing a fraction of the cost of the AT33 MC cartridge. I will be writing a more detailed article on the phono stage but for the purposes of evaluating the OL Silver250 arm I can report that a £500 pound cartridge is not necessary to hear the benefits of its neutral sonic qualities.

After 2 months of testing I had become convinced that the Origin Live Silver 250 was indeed a great arm and decided to try again the previously shunned originlikers that sound so poor straight from the box. To begin with they sounded just as I remembered them - closed in with a woolly bass and very odd imaging indeed.

But I decided to listen to them as they burn't in and I can report that things did improve considerably and gradually. So transparent is the OL Silver250 in combination with the Orbe and AT33 that it was possible to hear the individual drivers open up - first the midrange, then the tweeter and much latter the bass drivers. It took many 10s of hours and again will provide material for a future review. Apart from being an interesting experiment it shed no additional light on the qualities of the tone arm in question - except to convince me that its a great tool for reviewing Hi-Fi!!

Referring to the Silver 250 as a tool may sound rather damning with faint praise but it is not intended to be. Indeed I can think of no other component that I have heard that deserves this accolade because it provides such excellent transparency that it imparts no discernible sonic characteristic on the music that I could hear. The fundamental requirement of a test tool!

There may be better value propositions around to upgrade your system but if there is I haven't heard them - for 840 euros you get a component that lets your system realise its full potential. I fully anticipate this product remaining at the heart of my system for many years to come. A fantastic product then from Origin Live and this particular audiophiles dream review tool.