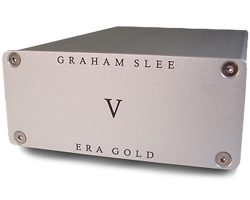 "This amazing-sounding product took me by surprise. I continue to recommend it for high-output moving coil cartridges..."

Now in its 9th year, it is one of the very few phono stage preamps ever to remain in Stereophile magazine's class-A recommended section for four years! It still features as a Stereophile recommended product. It was also Hi-Fi News 2005 award winner along with the Elevator EXP.

A fixed gain RIAA phono stage preamp, the Era Gold V marked a "sea change" in phono stage preamp design. The Era Gold V pushed bandwidth wide open, something phono stage preamps just didn't do! It brought high stability video frequency technology to vinyl to the surprise of many. Musical boundaries were broken down to reveal sound-scapes extending well beyond the listening room! And from normal commercial pressings at that!

It also brought about an understanding about "burn-in" that few hi-fi enthusiasts had known before. Burn-in was well understood by precision ADC (analogue to digital) chip technology engineers early in development history. Common electronic components like resistors had been found to take as long as six months to settle to the point of maximum accuracy. Those reviewers patient enough discovered the secret depths of the Era Gold V phono stage preamp, which after 3 weeks being constantly on, delivered hitherto unknown levels of vinyl musicality.

"OK I'm going to nail my colours to the mast... (and I'm going to do the same with an arm next review...) Lucio has banned us from saying "best I've ever heard" "never heard anything as good" etc as it begs the question "compared to what?" and is often meaningless hype. But here I've listed the runners and riders, added the caveat "in my system and room" and finally "to my ears", so here goes. The Era Gold + Elevator EXP is the best phono combination for MC's I've ever heard - period... "

"Given its price and its miraculous - and this agnostic means miraculous - performance. I recommend the GSP Audio Era Gold Mk.V as enthusiastically, if not more so, as I've recommended any product I've reviewed and recommended in all the years I've been doing this."

The Era Gold V, though superseeded by the Reflex M (M2) is still available due to popular demand.