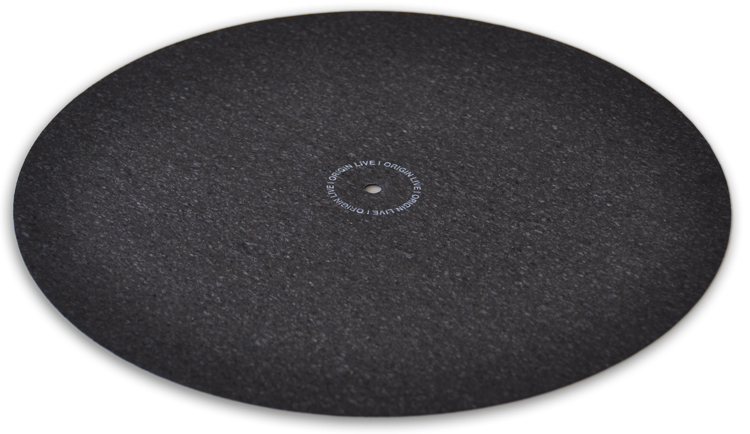 Probably the best low cost, high value upgrade you can make to your turntable regardless of its origin. It adds transparency, dynamics and bass depth. At only 1mm thick it’s easy to install without causing problems. The diameter is 296mm to fit inside the lip of decks such as the LP12 .

The turntable mat however is possibly the biggest improvement I have heard from any upgrade so far."   Rod Woods

The turntable mat is a critical interface between your vinyl records and the turntable you play them on. Experimentation with different turntable mats is simple and quick, and you find the sonic differences are usually obvious. Even if your deck does not officially "need" a platter mat this mat will upgrade it . Origin Live’s Upgrade Platter Mat makes a far greater difference than most others, bringing a positive difference to every aspect of the music…
The Origin Live Upgrade Platter Mat greatly enhances musical enjoyment, by bringing recordings alive. Music becomes better integrated and far more natural. Bass solidifies and timing improves – gone is a muddy bass that blurs performance. An extra octave of bass is often tapped by the Upgrade Platter Mat, too. The midband acquires increased clarity, as do the remainding frequencies.

Having recently attended two live music performances given by entirely different groups, it was interesting that in the first, a violinist added superbly to a non–classical band; the leader remarked afterwards that, "she has amazing tone". In the second, the orchestra’s conductor was introducing a lead cornet player doing a solo and remarked, "he has superb tone". After listening to the first few notes I could understand what he meant – as it was so pleasing to the ear that you just wanted to keep listening. Another player, playing the same instrument, was technically brilliant and hit all the right notes but just wasn’t as good to listen to.
This provoked a lot of thought on the similarities of tone in hi fi equipment – and it has to do with that indefinable something that measurements don't really capture. Some may claim to have the answers, but the truth is usually far more complex. Every material used in the hi-fi replay chain has a tone and some are far superior to others. Indeed, the material you use to support the actual playing surface in vinyl is probably one of the most important.

A great turntable mat has three functions which are very tricky to reconcile:
First, it must decouple the record from vibration entering it via the turntable, this includes bearing noise, transmitted motor noise through the drive system, cartridge feedback, chatter transmitted via the tonearm into the turntable, ground- and air-borne audio feedback, underground pumps, etc.
Second, it must absorb and transmit resonance out of the record itself. It is hard to imagine the microscopic levels that a hi-fi cartridge functions at. The truth is that a stylus vibrating in a record groove sets the vinyl resonating in a way that will feed back into the stylus if not highly controlled. This may be momentary to the tiniest fraction of a second, but will nonetheless create blurring of the signal and overlay other parts so that they will not be heard. In other words there can be loss of information and addition of spurious noise to the intended signal. A good turntable mat can do a great deal to eliminate these problems.
Third, it must transmit the drive to the record without elasticity or slip. Unlikely as it may seem, the surface that the record sits on responds very slightly to the amount of drag on the record. At best, this will be a very slight momentary elastic movement backwards, but enough to slightly deaden the impact of a bass note drum strike, for example. At worst it will cause the record to slip backwards, which is only obvious when you can hear wow occurring – as in the case of a badly dished record that only contacts the platter in the centre.

Why a New Platter Mat?

Initially we introduced a semi-rigid mat that we called Performance Mat. Feedback was almost universally positive, with users reporting superior performance over the recognised market leaders they already owned.
Further experimentation led to a new flexible composite material which sounded even better. Not just a bit better, a lot better. The Upgrade Mat does most things that the Performance Mat does, only it does them better – especially in the bass.

Will it Work on My Deck?

Finding a mat that works universaly well on all turntables is almost like the quest for the Holy Grail. In over 22 years we have experimented with countless platter mats varying from felt, fiberglass, air gap, various foams, cork, graphite, carbon fiber, acrylic, PVC, MDF, aluminium, rubber, silicon and steel laminates etc. This is to name but a few. Many of these mats yield significant improvements to some areas but have drawbacks in others.
A mat that works well on acrylic platters is almost unheard of, but this one really does the trick! It also interfaces well with metal, glass and composite platters. The Origin Live Upgrade Mat is only 1mm thick, and so is well within the ability of most tonearm height adjusters. The material mix from which it is manufactured must remain confidential.

No Risk Money Back Guarantee

The mat comes with a money-back guarantee if ordered directly from Origin Live. Should you be in any way dissatisfied, just return the mat for a full refund (excluding carriage). Origin Live dealers may also offer a guarantee but this is at their discretion.

"Unbelievable difference, thought the Resolution turntable sounded good before, much better in every way than my Primare CD31 cd player, and infinitely better than other turntables I have owned.

After fitting it with Siver tonearm and a Dynavector 20 cartridge and now have added your new turntable mat, I cannot stop listening to Vinyl.

The platter mat has improved all areas of the sound, most noticeable are the increase in soundstage, front to back mainly, the start and decay of instruments being played are also improved, detail is better, backing vocals that were audible before are now easier to follow, as are the lyrics of the main vocals.

But the largest improvement is the Bass performance, all notes are much clearer and the extension better, it has improved the timing of the music areas also which makes the musical message much more obvious, these are areas I was already more than happy with!

Surface noise is also reduced, which has resulted in more fine detail being heard, without those details being brought too far forward in the mix.

The Improvements in my system are amazing, I would have been impressed if this had been an arm upgrade or even a turntable upgrade, just can not get over all I have done is add a mat to it, bearing in mind I was using the turntable without one.

The rest of my system comprises of a Whest Audio 2 box phono stage, Primare I30 amplifier, and Wilson Benesch Actor loudspeakers.

Your brand has totally changed all my cynical thoughts, everything you have helped me with has exceeded my expectations.

The turntable mat however is possibly the biggest improvement I have heard from any upgrade so far.

Thanks as always for your advice." Rod Woods