Last month Origin Live won “Turntable of the Year Award” in Hi-Fi+ magazine. One reason we continue to win awards is that we pay enormous attention to details few others consider worthy of investigation. For example there is not much written about the design of side bias devices and even less about how they compare in sound quality.

If you care about sound quality, the type of Side Bias design is surprisingly influential. Not just for its function in keeping the cartridge central in the groove but for the degradation it causes to performance.

We’ve thoroughly investigated this area and listened to the effect of the various methods used to apply side bias.

The results verify that producing a good side bias device deserves a great deal of attention. Certainly more than some who dismiss devices such as a falling weight on a thread as “cheap”, whilst praising inferior magnetic or spring loaded devices with nicely engraved dials.

Brilliantly engineered precision dials that control side bias within a second to a fraction of a gram, impress you with their sophistication and ease of use. They look great and breathe precision engineering. There is only a couple of unanswered tick boxes – are they really accurate and what’s the effect on sound quality? Many discover too late that great engineering is never a guarantee of sound design.

Without a proper respect for the inconceivable effects of micro-vibration it’s easy to dismiss this type of research as obsessive and insignificant. However it’s not difficult to prove the clearly audible artifacts that whimsical side bias designs impose on sound quality. More on this later.

So before the allure of attractive dials and illusion of precision tempts us, let’s just step back and examine first principles in more depth.
Principles of side bias

It’s commonly expected that as a tonearm tracks through the grooves it experiences an outwards force. Centrifugal force or differential friction acting on inner and outer sides of the stylus are intuitive reasons for this misconception.

In reality, frictional force acts tangentially to the groove. This “pull” on the arm is not in line with the arm pivot but offset and thus produces an inwards (not outwards) side force – see diagram below. 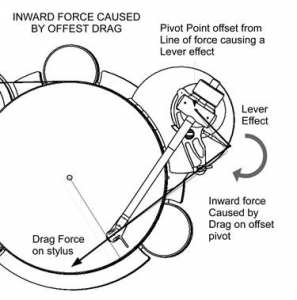 Things are far from simple but without going into detail it’s safe to summarise that the inward drag induced force is fairly consistent across the record increasing by about 18% towards the inner tracks (this is controversial as it depends on the cut of a record).

Side force is detrimental for the following reasons:

·         The unequal force on the inner walls of the record groove affects soundstage image slightly.

A good side bias neutralises these effects by counteracting the induced inwards force with an equal and opposite outwards force. In so doing, the stylus tracks the groove centrally to produce a notably more solid and focused soundstage.