If you are uncertain what version of Origin Live tonearm you have the following features make identification easy:

Do not have a dowel pin as shown in the photo: this is the definitive difference. Note: some Mk2 arms have a short aluminium sleeve covering the dowel pin. The arm tube is 12.5mm Diameter on MK1 Silvers and 10mm diameter on MK2 Silvers. 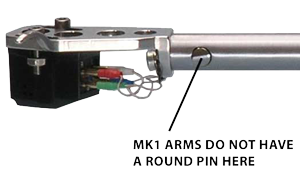 Silver, Encounter, Illustrious, Conqueror – these may have the round pin visible as shown above but later versions had a short 10mm length metal sleeve covering the pin.

Introduced May 2007 – These all had metal tubes with silver finish. The most noticeable feature on all arms from Encounter and above is that the armtube  can be lifted by nearly 1mm in the bearing house – there is no conventional gimbal bearing on the horizontal axle. 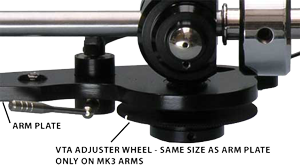 Another distinguishing feature is the integral VTA adjuster wheel shown above.

The C represents a special Carbon tube introduced throughout 2009 starting with the Enterprise.

The carbon tubes can be identified by the distinctive headshell joint with the tube.

Linear Flow 2 External Tonearm Cable – a balanced and fully shielded cable was also introduced for all arms as an option but fitted as standard to all Early Conqueror MK3C and Enterprise MK3C arms. It is easily identified as it has a black braid covering as opposed to the smooth insulation on the other external cables.

Superficially the MK4 version looks similar to the MK3C but MK4 arms can be easily identified by a slot in the rear stub for the counterweight. Other visual differences include a slimmer arm plate to reduce resonance and a slanted arm clip. MK4 versions represent a major leap forward in performance through a stiffer arm tube. It also introduces a number of improved decoupling devices within the armtube itself. This included a new interface with the counterweight which is attached differently.  Significant improvements are made to definition, transient speed, dynamics, separation, timing and overall musicality to name but a few.