This review was suggested by two events: I have been enjoying a SOTA Cosmos vacuum turntable since 2007 due to its outstanding performance. The second event was my review of the VPI Classic turntable which appeared about a year ago. While there were some appealing sonic characteristics from the Classic, and people seem to like it, I wanted to find out if an equivalently priced SOTA model might be sonically competitive. So here we are today. 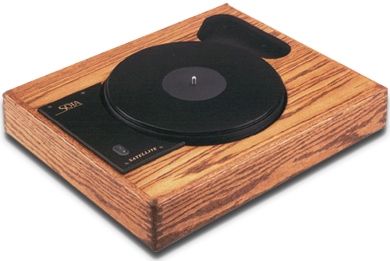 The SOTA Satellite turntable lists for $1500, and the Origin Live Zephyr tonearm is $1250. The optional I-Clamp is $90, or the Reflex Clamp is $245. The turntable was supplied with the I-Clamp and I was also able to try the Reflex clamp from my Cosmos turntable on the Satellite. An upgrade from the standard wood armboard to the Composite armboard is $85. The review sample had the Composite armboard which was pre-cut for the tonearm. The Satellite can be upgraded all the way to Nova status with suspended subchassis and vacuum. The platter has two layers of 3/8” plexiglass with a layer of dampening material between the layers. The motor is an AC synchronous type. The bearing is a polished shaft running on a hardened chromed steel ball in a spindle sleeve of Turcite®, which is an “internally lubricated acetate-based material”, similar to Delrin. (www.aetnaplastics.com) The overall weight is 28 pounds, and the Satellite offers both 33 1/3 and 45 rpm speeds. The total price of the Satellite and Zephyr, with the Composite armboard and I-Clamp, is $2925, close to the $2750 VPI Classic turntable with JMW tonearm.

The Zephyr tonearm is described as being “a turbocharged Silver”. It has a chrome finished yoke, an upgraded cable, a ginballed arm with specially treated bearings, a decoupled armtube made from aircraft-grade aluminum, and a decoupled counterweight. VTA is adjusted with a nut on the mounting base. A 12 inch version is also available. 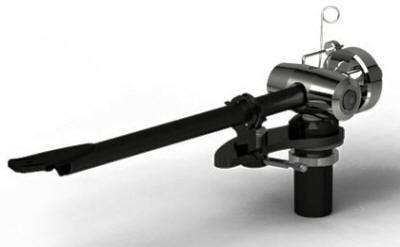 The Satellite has a nicely beveled gloss black switch plate and motor cover. The beautiful tongue and groove cabinet joints, a SOTA trademark, are furniture quality. The suspension is described as “hanging four-point elastic”, but it feels solid with no give as the record clamp is pressed into place. I like the rectangular shape of the turntable because I can rest my hand on the top of the table while cleaning the stylus. Also, since the arm is not just hanging out over empty space – as it would be with many of the minimalist round-shaped tables, I feel that the cartridge is better protected against accidental bumps. The very high quality of the finish and extremely precise operation of the Zephyr tonearm are usually only seen in far more expensive arms. For example, when using the cuing lever, the needle drops into exactly the same groove as it was in when the arm was raised. (In fact, a tonearm can do nothing else, but you know what I mean.) The precision of the arm makes it a pleasure to use, although the short finger lift on the headshell requires some attention for consistent manual operation.

The Satellite-Zephyr combination offers a large sound stage with excellent separation of the performers from eachother and from the speakers. The stage is tall and wide, often extending to the left of the left speaker and to the right of the right speaker. There is an excellent sense of drive and energy, what some call “pacing”. The main difference with the vacuum Cosmos ($7300) is in dynamic energy and sense of scale, where the more expensive turntable excels. The large soundstage of the Satellite-Zephyr maintains the excellent placement of instruments in the deepest area of the stage. This is far better performance than is heard from the VPI Classic, and addresses that table’s main weakness.

On the Dire Straits white album, side 1 is full of musical treats. The wood sticks at the opening of “Water of Love” have excellent tone and impact and sounds very realistic. On the same album, “Wild West End” has some extra sheen with a bit of forwardness in the lower treble. Not bright, though. The bass is very powerful, just looser than heard from the Cosmos.

Listen to the brilliant MFSL’s Sinatra’s Sinatra. All of it. Sinatra’s voice is full and rich, often playful, with very audible inflections and meaning. String tone in the bass is outstanding, and brass instruments have realistic bite with excellent extension. Nelson Riddle’s arrangements take us back to an earlier musical age when the sensibilities of most of the world were markedly different. The Satellite-Zephyr lets the listener feel this time difference while transporting Frank into the present. On Paul Simon’s Graceland LP, “Homeless” ably demonstrates the very precise placement of the chorus, not only to the left and right, but front to back, too. The sound stage is large and natural sounding, not filled with the flat “cardboard cutouts” we hear from the VPI Classic. On the same album, “Crazy Love, Vol. II” has plenty of pop and toe-tapping energy and is very entertaining. It is also apparent when listening to this album – or to any other – that the Satellite has excellent speed stability with vanishing levels of wow and flutter.

The overall resolution is similar to Cosmos-TriPlanar. The improvements with the more expensive table and arm are all “-er”: deeper stage, fuller, wider, smoother, with deeper bass and also, to be consistent (with extreme literary license), dynamic-er.

Having the Cosmos sitting next to the Satellite presented an idea for an interesting experiment. The armboards are interchangeable, so it was a simple matter to move the Origin Live Zephyr tonearm with the Composite armboard to the Cosmos turntable, and also to try the TriPlanar tonearm with Cosmos armboard on the Satellite. This is not quite a fair test, as both tonearms stayed mounted on their original armboards. The Cosmos armboard has “multiple layers of acrylic and lead, one layer of aluminum”, while the Composite armboard has “multiple layers of acrylic and one layer of aluminum”. I don’t doubt for a moment that the Cosmos armboard is better sounding, but we will just have to make do with the materials on hand. 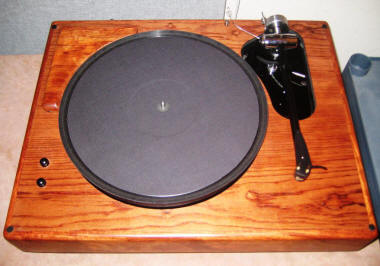 First, my listening notes for the Cosmos turntable with OL Zephyr tonearm:
– Has almost the smoothness of the Triplanar in the treble.
– Outstanding bass that is very tuneful.
– Power and resolution continues very evenly from the low bass to the lower midrange, offering very convincing bass instruments, including drums.
– Small sense of forwardness in the upper midrange which provides a lively sound and very good toe-tapping rhythm and drive. This lively sound never goes over the edge into intrusive brightness. 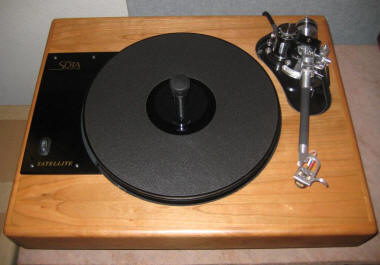 More powerful in the low bass than Satellite-Zephyr, which is not really a surprise considering the much more massive build of the Cosmos. The Cosmos elevates the entire performance, evenly across every sonic parameter, as expected. The overall sound of the Cosmos-Zephyr is more refined with better low level detail than the Satellite-Triplanar, from which we might infer that the turntable plays a larger role in the overall sound. However, remember that the armboard is also a variable, so blanket conclusions are risky. Every note from the Cosmos-Zephyr has wonderful development and seems to blossom to fullness. Very entertaining.

Let’s spend a few minutes talking about clamps. The Satellite was delivered with the I-Clamp, a “low mass screw-tight record clamp” available separately for $90. Good results are heard with and without the I-Clamp. With no clamp, the lowest bass is looser and a bit unfocused, but the upper frequencies are noticeably smoother and the sound stage has better depth. The Reflex Clamp ($245) offers the best of both worlds: nimble and resonant bass that seems to extend another 5 Hz, with the clean high frequencies of listening “clamped”, but with better stage depth. The improvement with Reflex Clamp is easily noticeable: all lower frequencies have more power and higher resolution, and the soundstage is deeper, with improved separation of instruments. The sound is a little smoother throughout midrange with the Reflex clamp. Poorer recordings hold on just a little longer before breaking down into glare. I did not expect such marked differences between the sounds of the two clamps. The same differences were heard on the vacuum Cosmos turntable, except that the magnitude of the differences seemed larger. It pays to experiment with and without the standard clamp or just purchase a Reflex Clamp when you order. The Reflex Clamp is a worthwhile upgrade over the I-Clamp.

If you have a solid support shelf, the non-suspended Satellite should work very well. If the floor is less than solid and free from vibration, a suspended turntable that is properly designed for environmental immunity, such as a SOTA Jewel or Sapphire, is a far better option than using a non-suspended table with some after-market shelf add-on. Excellent results were consistently obtained when the Satellite-Zephyr was used with the Rogue Ares phono preamplifier; the combination made music.

The SOTA Satellite turntable with Origin Live Zephyr tonearm handily outperforms at least one well-received competitor in its price range. While better performance is obtainable at a higher cost, this combination offers a very consistent sound from low bass to upper treble and makes fine music that is always enjoyable.

My thanks to Jay Kaufman at Audio Revelation. This review would not have been possible without Jay’s kind assistance.