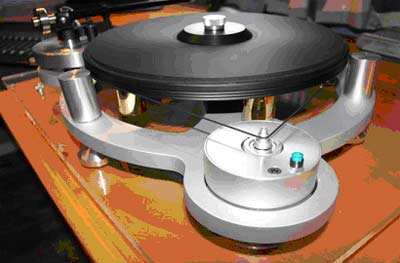 It is now feasible to lift up pod.

On some Michell decks the motor is encased by rubber – this needs to be sliced off as a last resort but it may be possible to lever the rubber out along with the motor – the rubber is held in by a “lip” and glued to the motor pod.

NOTE: on later Michell pods the top plate does not split off the main pod but the principle for fitting are similar.

You have now finished fitting the motor.

Thanks for your help in transforming my old Mk III Michell Gyrodek both with the just completed motor upgrade and the earlier arm and Aurios pro bearings. I thought I’d write to recount the story in rather more detail.

Originally the Gyrodek had a Linn LVII Ittok arm and despite running on 1.2 Aurios bearings (which had improved things significantly) it had been struggling to keep up with the digital front end. I had been trying to decide on a complete replacement for the Gyrodek thinking it had reached the end of its useful life in the context of the rest of the system which had undergone major improvement.

The first change last year was an OL Illustrious arm to replace the Ittok – and a huge improvement. The second was Aurios Pro bearings which seemed to transform whatever they were placed under. To my surprise they were much more effective under the Gyrodek than the 1.2 bearings – and that is where they have stayed. With the Pro bearings under the Gyrodek analogue replay was clearly superior to CD replay, roughly on a par with SACD.

Meanwhile the old Gyrodek AC motor was chugging along on what seemed to be its last legs. Was it worth spending money on a DC replacement or should the whole deck be replaced was the difficult question. Finally the motor failed and I perhaps reluctantly decided to try an OL Advanced motor kit plus transformer and 200 motor upgrade.

I’d read many reports in magazines and on the net saying how much better DC motors were – and clearly with the Advanced unit it was true. So much so that the next day I wanted to try an Ultra power unit to compare it. It was immediately obvious that the Ultra unit outperformed the Advanced by a margin that more than justified the price difference – and things have improved further over several days since as things have run in. Overall the effect of the Ultra kit/transformer/200 motor is stunning. I could not have imagined that the effect would be so big – vinyl now clearly demonstrates the deficiencies in CD replay and beats CD/SACD by a really wide margin – on an old deck which I had thought was well past its replacement date. Interestingly the effect of adjustment in tightness of the tonearm bottom nut (barely tightened by hand seems best), record clamp device and arm height/VTA now have really marked and obvious effects; when set about right things sound really glorious.

Although the full Ultra/200motor/transformer upgrade cost nearly as much as a new Gyrodek SE I think the result is actually very good value for money compared to other things in my system. It seems to have enabled the old Gyrodek (with the Illustrious arm and Aurios Pro bearings) to perform so far beyond my expectation – and there’s still room for more improvement with maybe a new Michell platter and Gert Pedersen suspension upgrades for it too. My only regret is not having replaced the AC motor sooner!

And to put the above remarks in context….