I had always intended to upgrade my Michel Orbe turntable to a DC motor but had placed it lower on my upgrade agenda. That was until I purchased the Clearaudio speed record and strobe. I measured the speed of the original AC motor and found that not only was the motor running fast but with a huge amount of speed variation. I tried changing the belt tension but to no avail, I couldn’t even recalibrate the speed! I ordered the Origin live motor upgrade later that day.

I chose the Origin Live upgrade because I wanted the choice of 1, 2 or single thick belts. The second reason is the ease of speed adjustment.

Installing the Motor into the Pod

All the Origin Live Motor top plates will not fit the Orbe’s motor Pod! The two round top plates offered by Origin live have a Diameter that is too small and to compound matters the way that the pod is constructed makes it very labour intensive to use the origin live or any other custom motor top plate with the pod. The good news is that with a little work the original Orbe’s motor top plate is virtually ideal for the Origin Live DC Motor. The length of the motor is the tightest fit but is no problem as long as the DC voltage connection tabs at the base of the motor are gently bent out wards.

The Only major work required is the drilling of holes in the original top plate (these 3 holes are for the DC motor fixing screws). The original motor and switch were de-soldered and removed; I then used one of the origin live top plates to create a paper template for the position of the screw holes. The template was then cut to fit into the Orbe’s top plate recess. Just to check I held the entire top plate (with template in place) up to the window so that the light shines through the original motor hole, this allowed me to get the best position for the 3 screw holes. The metal is Aluminium, so was easy to drill, I used only a standard PCB drill and stand (set to the lowest speed).

The motor was then screwed onto the top plate without alignment problems.

I chose to use the 4-pin connector that the original Michell motor used. The DC power cable was cut to the required lengths and soldered to the male and female connector pins.

Set Up and Final Adjustments

The pod was placed into the orbe’s motor hole and the motor top plate levelled. The motor has a type of cork ring that sits between the top of the motor and the top plate, as cork is soft by nature I found it worthwhile to set the motor’s spindle to 90º in relation to the motor top plate. This was simply done with a small setsquare and by adjusting the 3 motor screws.

I originally heard a knocking noise when the motor was started but I found that I had not placed the pulley onto the spindle tight enough, once corrected the Motor noise was barely a whisper. I went straight for 2 belts (both brand new). The problem with two belts is setting the system up perfectly so that both belts do not move up and down during rotation. 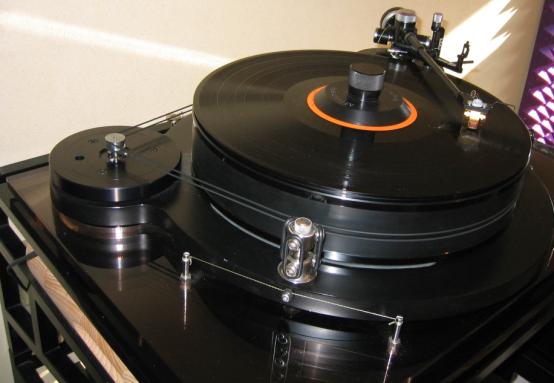 I found two reasons for the belts not stabilising whilst running:

During the first month the motor speed needed re-adjustment due to the burn in process but the need to adjust got less and less with time. With the controller’s adjustment pots accessible from outside this was easy and a tweakers dream. The adjustment pots are of the good quality multi turn variety. However as all HiFi enthusiast need to complain about something:

It would have been even better if the trim pots were on the front of the unit and totally superb if each trim pot had knobs for real ease of use.

The sound was a massive and I mean MASSIVE improvement over the AC motor, how it would compare to the Michell DC never connected I do not know.

The first obvious thing is the pitch stability, I was instantly aware that the Pitch is what creates the “note” on the instrument. The pitch of the deck allowed the speed and control the artist has over his instrument to be portrayed, a bow being drawn across the strings with confidence, a bass guitar tightly propelling the pace of a track. In fact the pace of the music is now so sure-footed and clear that any slight increase or decrease in pace is instantly heard. Very nice indeed.

The more burn in the motor had the more the noise floor began to drop away leaving the singers, guitars etc… standing in air. There is an increase in background blackness, which had the effect of increasing Dynamics, attack and detail; each instrument comes out of a crisper blackness. Late night sessions are incredible.

A single belt gives a more relaxed smooth sound with “slightly” more detail, two belts seem to separate and project the instruments in space better but it’s the “drive” of the music that is especially superb. I noticed I was holding my breath whilst a singer was holding a long drawn out note, Pavarotti must have serious lungs and incredible breathing control. Two belts on heavy metal is exactly what you should hear; fast, raw, powerful and very engaging (time to dust off the old air guitar).

Without doubt I am a two-belt man.

It is unbelievable that the drive of the platter makes so much difference to the music. Once set up and with the platter running at exactly 33 1/3 the contrast between the speed of instruments can be heard not only in a timing sense which is now plainly obvious with this upgrade, but it gets right down to the frequencies sounding right. During burn in I could hear when the speed is running slightly too fast as the contrast between slow and fast instruments is less due to them all sounding fast. Speed adjustment is so important.

After one month of burn in, the next thing that suddenly hits you, but was always slowly improving, is that absolutely nothing gets confused, each instrument is well separated and solid in it’s own space. Right down to the jet flying off into the distance on Pink Floyds Final Cut “get your hands off my Desert” the jet is tiny, but confidently solid in air.

This is just getting better and better!

The upgrade has improved everything from my SLX deccas, Jazz, and my limited but soon to expand heavy metal…the orbe never sounded so musical.

But the strangest thing is that I listen to the radio in the car or a cheap HiFi in a friends house and it does not better my system for musical flow or rhythm, in any way what so ever…..very rewarding.

The DC200 motor, Ultra Power supply, 2 belts and upgrade transformer now rate amongst one of my ultimate upgrades, they have simply brought me closer to the music. Much more than I would have thought possible.